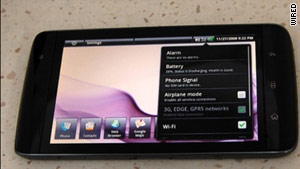 Apple sure got it wrong not putting a camera on the iPad. Dell got it right, they put two! About twice the size of an iPhone I can totally see this as a great platform for AR apps. It runs Android too. Great job Dell!
-Jack
Via one of my favorite Blogs (Games Alfresco):
“While the Apple iPad TabletÂ announcementÂ last month was disappointing for augmented reality developers andÂ enthusiasts, the details about the upcoming Dell Tablet will make you salivate.
The Mini 5 will have a five inch touchscreen with both front and user facing cameras allowing full augmented reality capabilities. Â WiFi and 3G connectivity allow enough bandwidth and the 1.0 GHz Snapdragon Qualcomm processor will give the Mini 5 the juice it needs to power resource-expensive AR apps. Â Itâ€™ll run the latest version of the Android OS which gives it ARÂ credentialsÂ right away since there are many apps already made for that system.
The price plan will affect the market that itâ€™s trying to fill, though Dell says they will price it â€œcompetitivelyâ€. Â But I donâ€™t think I could have asked for better features from a tablet for augmented reality. Â The weight of the device might impact AR since holding it up will be harder than a smartphone and since itâ€™s a touchscreen, will you want to hold it with one hand and navigate with the other? Â I hope some AR developers can incorporate voice commands into their games and products.
And while the screen might be too small in this version, they have eluded to a suite of tablet products so maybe a larger iPad sized version might come out in the future. Â Personally, I already have a free smartphone from work, so a tablet that does different things on a bigger screen would be appealing to me.”